We shall strive to secure and maintain safety, health, and environmental protection and prioritize them.

We shall establish a management system for safety, health, and environmental protection to materialize the basic policy and focus on the following matters.

■On-board activities
Safety management personnel are stationed at major ports (Chiba, Tokyo, Osaka, Niihama, and Tokuyama) and visit over 4,000 ships annually to provide safety guidance and caution on the operation of vessels.

■Tabuchi Kaiun Safe
Transportation Council We promote safety activities of the entire group, together with the respective shipowners. We also recognize excellent shipowners and vessels.

■Background to the adoption of the ISM Code
After the sinking of the Titanic in 1912, the International Maritime Organization (IMO) established the International Convention for the Safety of Life At Sea (SOLAS Convention), 1974, to improve equipment and facilities. However, as 80% of the recent marine accidents have been caused by human error, regulations on aspects such as personnel and their skills were added as Chapter 9 of the SOLAS Convention. 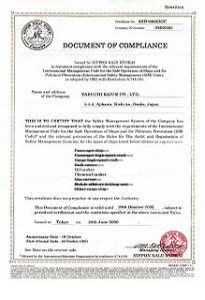 From July 1, 1998, the application of the Code was enforced in the case of vessels engaged in international transportation (except for general vessels), and the operation management of companies and vessels without the Code was no longer allowed. Voluntary acquisition of the ISM Code for domestic vessels also became possible in October 2000.

DOCDocument of Compliance (DOC) and Safety Management Certificate (SMC) are issued to companies and vessels conforming to the ISM Code.

In October 1997, the Company acquired a DOC from Nippon Kaiji Kyokai (Class NK), an audit authority of the ISM Code, and in December 1997, we obtained the SMC for Shosei Maru (chemical tanker). 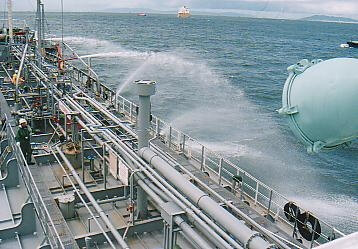